We are meeting for 10am Sunday School & 11am Corporate Worship Service (child care provided). #churchisessential

We sing together and do not require masks, but you are welcome to wear a mask and there is room to adequately socially distance.

The people of Isreal sinned when they gathered themselves together against Moses and Aaron to contend with them. Moses and Aaron start off well, falling on their faces before the LORD to seek his help. But then, what did Moses do wrong? He tried to take the place of God instead of acting as His obedient prophet.
-Disobeyed God's word to him "because they did not believe Him"
-Wielded the rod, the symbol of Gods authority and power, when they should’ve simply spoken
-Mocked and condemned the people by calling the rebels, a term that God had used of the people, but a term that only God should use.
It is the word of God and His Spirit that changes people, and we are responsible to be faithful to what He has commanded. Mocking, venting in anger, exhibitting authority and control that is not yours, these are unacceptable responses for a leader, elder, or parent, even to rebellion. 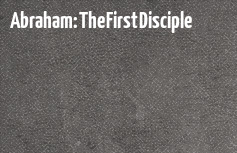 More in Abraham: A Picture of Discipleship